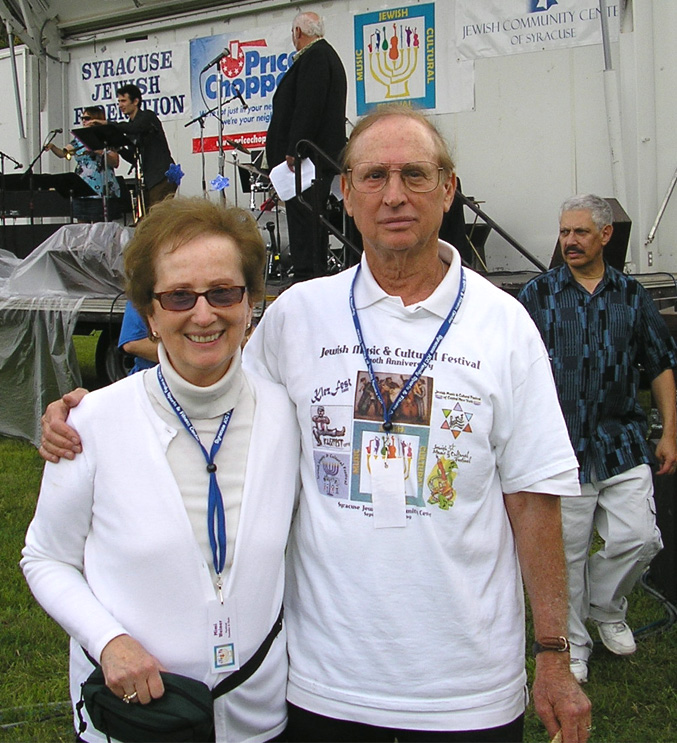 Pictured above are Mimi Weiner and Sid Lipton. They are the co-founders of "KlezFest" - an event celebrating klezmer music from eastern Europe. Back in 2001, Mimi & Sid approached me about getting involved with the event to help with getting undenwriters, publicity & coordinating the logistics. After the initial two years in 2000 & 2001, they felt in order to grow the event someone was needed to be the Festival Organizer. | want to thank Mimi & Sid for putting the trust in me to be that person! For over 13 years we were able to create a special wondrous event... he Jewish Music & Cultural Festivall.

Both Mimi & Sid along with our committee were open to many of the ideas |brought to the festival, which are now mainstays - changing the name from “KlezFest"to “Jewish Music & Cultural Festival of Central New York"...Jewish Community Synagogues 8 Organizations Tents...Children's Activities Tent...Jewish arts & crafts village... Shofar blowing... largest CNY Hora dance... Rabbi's Corner..expanding the Kosher food menu. .more variety for Jewish music besides Klezmer.

To help the festival, my relationships with the business community and media along with Jewish synagogues, organizations and community made the "Jewish Music & Cultural Festival” into a well-established community event. There are many people, companies, synagogues and organizations that | want to thank The list will be below.

There are also many highlights over the years...in 2002, moving the festival to Clinton Square...in 2003, Jewish Community tent & Children Activities tent added... over 4,000 people attending in 2004 to see SIMPLY TSFAT from Israel. .n 2005, featuring Jewish rock with RICK RECHT and a display celebrating 350 years of Jewish-Americans...in 2006, Jewish Jazz with THERESA TOVA & 100 degree temperature in Clinton Square...in 2007, PARPARIM ENSEMBLE from New York City presented a Celebration of Israel in dance and song...in 2008, special "Israel@60" service along with celebrating Bar & Bat Mitzvahs also with Dads, plus the return of SIMPLY TSFAT..in 2009, moving the festival to the Jewish Community Center with headliner SUSAN WATTS, ELAINE HOFFMAN WATTS & THE FABULOUS SHPIELKEHS...in 2010, CNY largest Hora Dance added with shofar blowers along with SIORA & Jewish Jazz...in 2011, the Rabbi's Comer is a new addition and ATZILUT is the headliner..in 2012, THE AFRO-SEMITIC EXPERIENCE with Syracuse Chapter of the Gospel Workshop of America: the Klezmer Kabaret Puppet Theater and Kosher Beer sampling...in 2013, the theme for the festival was "Tradition" with honoring synagogues and organizations that are pillars in the Jewish community along with the international group THE GUY MENDILOW ENSEMBLE.

Through the years we have had good people on our committee and others volunteering in tum doing a Mitzvah for the Jewish Community. This truly became an event that brought the Jewish community together and an outreach to the community at large to share Jewish music and culturall

Early in 2014, | decided to step back from the festival. Even though I'm not. involved now, | do wish the best to Mimi, Sid & the festival

The greatest memory | will have of the Jewish Music & Cultural Festival are the thousands of people that came - schmoozing, dancing, listening, kids playing, eating and all the smiles on the faces of the people that attended TODA RABA! (Thank you very much)

To find out about the current festival Click Here

This is a list of rabbis, synagogues, organizations, companies and people that | want to thankil!